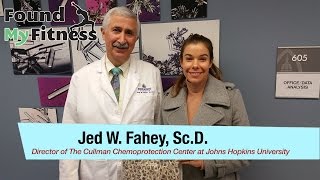 Watch the Webinar
or
Listen to the Podcast  (available via FoundMyFitness.com on iTunes and Sticher)
Notes from the podcast:
Dr. Jed Fahey is a multi-decade veteran of isothiocyanate research and is the director of the Cullman Chemoprotection Center at Johns Hopkins University. Much of this conversation, as you might expect given Dr. Fahey’s pedigree as a research scientist, is focused on isothiocyanates and, indeed, sulforaphane! While we covered quite a lot on this very topic (isothiocyanates) via my solo podcast a few weeks ago, this covers everything that may have been overlooked…. and, indeed, so much more!
Skip to the timeline below for a sampling. Dr. Fahey and his colleagues have been, in a big way, at the absolute center of what is a staggering amount of research on these very powerful compounds. There is hardly a topic which we can discuss in which he doesn’t have an anecdote about a study he was involved in, or, in some cases, tribal knowledge that may not even be published but is nonetheless interesting and an important part of the story that is unique to his particular vantage point.
In this 2-hour and 30-minute interview, we discuss…
00:00:00 – the early history of sulforaphane research, including key initial discoveries.
00:00:37 – the serendipitous unfolding of events that lead to the converging of the research on the NRF2 stress response pathway with the sulforaphane-related research going on at the same institute Johns Hopkins.
00:05:06 – why cruciferous vegetables bother to create isothiocyanates in the first place.
00:07:26 – the involvement of the heat shock proteins, in addition to the increased activity of Nrf2, as an additional cellular response mechanism that’s been observed in association with sulforaphane.
00:08:11 – how sulforaphane affects a diverse array of biochemical processes from glutathione synthesis to elimination of reactive oxygen species and detoxification of harmful compounds, including carcinogens.
00:15:01 – whether or not to cook your cruciferous vegetables.
00:15:34 – the epidemiological (associative) evidence that cruciferous vegetable consumption may help reduce the risk of cancer.
00:18:30 – the extremely unpredictable nature of endogenous conversion of glucorapahanin (the precursor) into sulforaphane between person to person.
00:22:14 – practical information surrounding supplementation of sulforaphane.
00:27:05 – the effect one particular french sulforaphane supplement had on the doubling rate of PSA, which is a marker for prostate cancer recurrence in prostate cancer patients.
00:28:17 – the role that the Cullman Chemoprotection Center at Johns Hopkins has played, in addition to fundamental research, in providing early, vital infrastructure enabling some of the efforts of the international research community in elucidating the effects of sulforaphane and related compounds and the underlying biological pathways.
00:28:26 – the incredible, almost geometric growth in new studies that has occurred since the advent of a few of the key discoveries about sulforaphane and its method of action. 00:32:48 – the practicality of probiotics as a way to improve endogenous myrosinase activity needed to convert the precursor to sulforaphane into the bioactive sulforaphane.
00:33:26 – the involvement of our gut bacteria in our ability to convert the precursor of sulforaphane into its active form.
00:37:13 – whether or not endogenous myrosinase activity improves as a function of repeated challenge with glucoraphanin (the precursor to sulforaphane). 00:39:30 – why probiotics may vary in their degree of efficacy.
00:43:00 – why consuming isothiocyanates to reduce the number of bacterial colonies of h. pylori, a risk factor for peptic ulcers and stomach cancer, may turn out to be a better intervention than complete eradication of the species with antibiotics.
00:47:21 – the bizarre relationship h. pylori has with childhood asthma, where it has been shown that having some h. pylori seems to reduce asthma incidence