In a makeshift greenhouse comprised of steel growing racks, plastic tarps, and a portable electric space heater, …colleagues Jed Fahey and Tom Kensler grew broccoli sprouts for a clinical trial to gauge sulforaphane bioavailability in humans. It was the winter of 2003 in rural China, and bitterly cold. The duo watered the sprouts every two hours, risking electrocution, freezing, and flooding. In the end, they produced more than 200 kilograms of broccoli sprouts and one enormous batch of bitter-tasting broccoli sprout “tea.” Future trials…relied on freeze-dried preparations developed in less spartan accommodations.

~Excerpt from Broccoli: Cultivation, Nutritional Properties and Effects on Health

In a research career that has spanned more than four decades, Thomas W. Kensler, PhD, has held numerous faculty positions at Johns Hopkins and was recently appointed professor emeritus at the Johns Hopkins Bloomberg School of Public Health. His scientific contributions have been published in more than 425 peer-reviewed articles, book chapters, and reports, and he has garnered numerous awards worldwide, including the AACR-American Cancer Society Award for Excellence in Cancer Epidemiology and Prevention and the Society of Toxicoogy Translational Impact Award. In 2011, Kensler received China’s National Friendship Award, their highest award for foreign experts who have made outstanding contributions to the country’s economic and social progress.

You could say it all started with a free lunch.

Kensler first arrived at Hopkins in the fall of 1980, a junior toxicologist not long out of postdoctoral training at the National Cancer Institute. Working just down the hall from Kensler was the late Dr. Ernest Bueding, who convinced Kensler to contribute to his studies of the effects of dithiolethiones, a class of molecules known for their chemoprotective activities. During that time, the Cullman Center’s founding director, the late Dr. Paul Talalay, hosted a weekly meeting that included a pantheon of renowned scientists, and he invited Kensler to join them. The meetings included a free lunch – a bonus to a young, hungry researcher – and gave birth to a robust, collaborative relationship between Kensler and Talalay.

Kensler’s early interests in chemoprotection provided the impetus to conduct an experiment assessing the anti-carcinogenic properties of a copper-containing compound that mimicked the actions of superoxide dismutases, a class of antioxidant enzymes. Superoxide dismutases form the human body’s front line of defense against reactive oxygen species-mediated injury, a precursor to many chronic diseases. Unfortunately, Kensler had no resources to perform the experiment, so Talalay stepped in to provide funding – a gift of just $200 – to finance it. The investment paid off, and the findings from the study were published in Science. “It really launched my career and developed some momentum for the reactive oxygen species field,” says Kensler.

A native of Massachusetts, Kensler earned his bachelor of arts degree in biology from Hamilton College, a small, liberal arts school in Clinton, New York. He later earned his doctoral degree in toxicology from the Massachusetts Institute of Technology. His path to toxicology was circuitous, however. “As an undergraduate student, I wasn’t especially forward thinking in terms of what I was going to do next,” says Kensler, grinning. But in April 1970, Kensler participated in the first Earth Day celebration. He had a vested interest in the earth’s preservation born of his deep love of the outdoors and a strong appetite for discovery. His combined passions prompted him to think about what he could do in a broad environmental context, eventually motivating him to study toxicology.

Since then, the bulk of Kensler’s research has centered on identifying and exploiting the biochemical and molecular mechanisms that protect humans against cancer after exposure to carcinogens in food, water, and air pollution. His primary interest has been aflatoxin, a carcinogenic molecule produced by Aspergillus flavus, a fungus commonly present in many staple food crops such as corn, wheat, and peanuts. Aflatoxin exposure markedly increases the risk of developing liver cancer. Qidong City, in the eastern province of Jiangsu, People’s Republic of China, has amongst the highest incidence of liver cancer worldwide. Kensler has led 10 clinical trials in this high-risk region (making nearly 80 trips in all), in hopes of identifying compounds that would modulate the metabolic fate of aflatoxin and other environmental carcinogens in people living there.

Kensler’s first trials were with oltipraz, a repurposed anti-parasitic drug, and chlorophyllin, a derivative of chlorophyll. Both had shown great promise against aflatoxin in experimental models, but were expensive or difficult to administer. By the late 1990s, however, sulforaphane had appeared on the nutritional map, and Kensler saw its potential against aflatoxin. He approached Talalay about putting sulforaphane into a clinical trial. “[Talalay] was somewhat resistant, though,” says Kensler. “The science behind sulforaphane was strong, and he didn’t want it screwed up.” Kensler eventually convinced Talalay that they could run a good, solid trial. “[Talalay] threw his support behind us and Jed [Fahey] and I went over to run a small pilot in 2002 and our first real trial in 2003.” 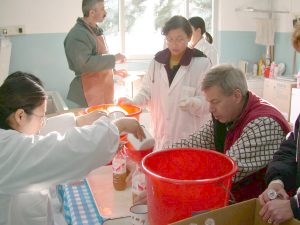 They hypothesized that sulforaphane from a broccoli sprout beverage would promote the modification and elimination of the carcinogenic form of aflatoxin, a process called detoxication. These modified carcinogens, called metabolites, would be measurable in the blood and urine of study participants. “We hoped to observe speedy elimination of the carcinogens from the body, with the notion that the lower the body burden, the more [cancer] protection you’re likely to achieve.” In addition, they looked for DNA adducts – damage products created by the interaction of aflatoxin and DNA. Unchecked DNA damage can initiate the carcinogenic process. By all accounts, the trial was a raging success. “We found that elimination of detoxication metabolites went up, and DNA adducts went down,” says Kensler. “Those successes sent us clear signals that we were changing the dynamics – the fate – of carcinogens in the body.”

Dr. Jed Fahey, Director of the Cullman Chemoprotection Center, has known Kensler for nearly 25 years, accompanying him on many of his trips to China and forging a deep friendship. “He is one of the sages – the gurus of chemoprevention,” says Fahey. “As such he ranks alongside a very small band of his older colleagues who have been in the spotlight more often than the unassuming and modest Kensler.”

This quality of modesty is exemplified in Kensler’s description of the achievement he’s most proud of: “The ability to bring together a multinational team [of scientists] in the early 90s that’s still working together. I think that’s pretty unusual in science,” says Kensler. “They’re good people, good friends – like family – and still practicing good science.”

Kensler continues to bring his strengths to the Cullman Center, now as a translational scientist – performing well in the basic science arena but with the perspective and experience of how to transition that science into clinical studies. Though not a full-time member of the Cullman Center, Kensler has been a steadfast partner and has led the way on many projects, says Fahey. “By rough count he has co-authored at least a peer-reviewed paper a year with full time members of the Cullman Center – as well as its predecessor – for the last quarter century.” 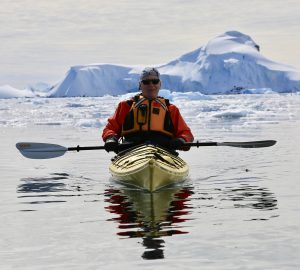 Despite Kensler’s vast contributions to the scientific community, he doesn’t think about science all the time. His love of the outdoors is still strong and provides him the opportunity for mental respite. “I often look for opportunities to go hiking or kayaking, and when I get out there, I don’t think about science. It’s refreshing and mentally relaxing,” says Kensler. On a recent family trip to Antarctica, Kensler kayaked in iceberg-filled bays, surrounded by whales, seals, and penguins. “It was mind boggling,” says Kensler. “I didn’t think about science when I was doing that!” He adds that science is not something one can easily turn on and off, however. “I don’t think it’d be any fun if you could.”

You can learn more about Dr. Kensler in this article and this video (partially presented in English).