The Cullman Chemoprotection Center’s longtime patron, Lewis B. Cullman, has passed away at the age of 100. 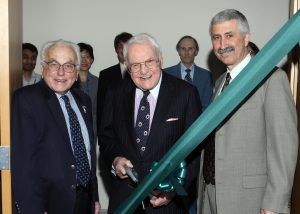 Lewis Cullman and Drs. Paul Talalay and Jed Fahey at the inauguration of the Cullman Chemoprotection Center.

Lewis and his wife Dorothy (now deceased) were extraordinarily generous patrons of the fine arts, the humanities, and the sciences. Their connection to Johns Hopkins and to our work started almost 30 years ago, when he started asking the late Dr. Paul Talalay for scientific advice on some of the Cullmans’ philanthropic targets, such as the New York Botanical Gardens (NYBG). (With Paul’s counsel, Lewis ultimately funded and helped to inspire the NYBG’s molecular systematics program.) The Cullmans then went on to support the research started in Paul’s Molecular Pharmacology Laboratory and to help provide the funding to establish the Brassica Chemoprotection Laboratory in 1993. The latter was re-inaugurated in 2011 with a much broader mission as the Lewis B. and Dorothy Cullman Chemoprotection Center at Johns Hopkins University School of Medicine. 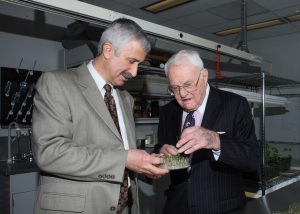 Lewis Cullman examining some broccoli sprouts with Dr. Jed Fahey. Cullman was keenly interested in and supportive of the work at the Center.

The Cullmans’ funding was critical in permitting our work to continue in the face of lean NIH funding, especially in the early days of this research when it was neither popular nor attractive to most funding agencies. Lewis recognized that rallying dietary plants and their defensive compounds (phytochemicals) to the defense of human beings faced with an onslaught of chronic disease made sound economic and biological sense. Lewis’s ever-inquisitive and relentlessly optimistic partnership will be sorely missed. His obituary can be found in the New York Times, and a nice tribute to his philosophy of philanthropy can be found in the Wall Street Journal.