The Cullman Chemoprotection Center at Johns Hopkins University, in a long-term partnership with an international team led from Mexico (Universidad Nacional Autonoma de Mexico and the International Moringa Germplasm Collection), has collaborated to publish a pair of studies in the Nature journal Scientific Reports.  Neither study received funding from the NIH or other traditional sources of research support, despite representing well over a decade of joint research efforts.  Many years ago, team co-leaders Jed Fahey and Mark Olson started analyzing plants from the highly nutritious tropical plant genus Moringa, which Olson had collected from areas in the horn of East Africa (e.g. Somalia), India, Pakistan, Kenya, Madagascar, Namibia, Ethiopia, and Egypt.  The most common species, Moringa oleifera, is now being promoted around the world as a “superfood”, a term that scientists generally don’t encourage but that in this case may be justified.

In the first paper, the team reports the discovery of two never before described “phytochemicals” with potential medical value. These compounds are glucosinolates or mustard oils, almost identical to those found in broccoli. All surviving species of Moringa, including some that are rare and endangered, were evaluated for their chemoprotective potency and their phytochemical arsenals.  Remarkably, the authors found that some moringa species rival or possibly exceed the most potent chemoprotective mustard oil plants currently known. In large areas of the tropics, availability of nutritious plant foods with well-documented medicinal properties is poor, and Moringa fills this crucial gap. 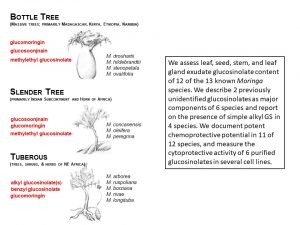 The second paper features work done by Gwen Chodur while a student at the Chemoprotection Center.  Relationship between content of the newly discovered glucosinolates and taste were evaluated, as was protein content, and other characteristics important to the nutritional and medicinal characteristics of Moringa oleifera.  Difference in harshness of taste between wild type and domesticated accessions of this protein-rich species could be readily discriminated by a taste panel in Mexico, based solely upon the presence of the two predominant glucosinolates.  These results give powerful impetus to efforts to improve Moringa, because they suggest that careful selection can maximize chemoprotective potency and nutrition with no sacrifice of flavor. 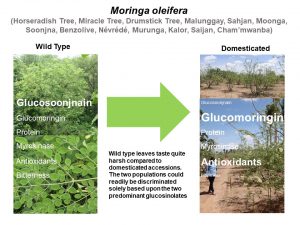 This very special tree-vegetable could help fight famine and malnutrition, and become a staple food source in hot, dry regions of the world – the poorer regions of the dryland tropics.  In these regions Moringa oleifera can be a lifesaver, as could some of its close relatives, unless they become extinct through destruction of habitat. This work should be useful to those growing Moringa oleifera for food and medicine, and it should further inform investigations into the medicinal and nutritional value of the other, lesser-known, and environmentally threatened species of this disappearing plant genus.