Participating in the scientific process can be very interesting when living in rural Mexico. It takes a different form than one might think of – no white, fluorescent-light washed rooms with modern equipment whirring and buzzing. This science is raw and dirty.

When I first started the moringa tea project, I had no idea what to expect. As a Biology major at the University of Chicago, I am no newcomer to the scientific process. However, the majority of my experience has been in wet labs focused on genetics. Other than a one-week trip to a research station in the Costa Rican tropics, plant science was a new experience.

The plant I would be working with specifically, moringa, was also foreign to me. My first day in rural Mexico at the International Moringa Germplasm Collection, I tried to memorize its shape and look in order to distinguish it in the future. Day-by-day, things got easier, and after getting more thorough instructions and deciding on basic protocols, I started the project with a fair amount of confidence.

The overall purpose of Drs. Olson and Fahey’s project on which I’m working, is to sample the nutrient and protein contents of tea made from different plants (actually many varieties or sub-species or “cultivars”) of Moringa oleifera, the main species of moringa used by people in the dryland tropics. Drinking moringa tea is a common method of ingesting moringa, both in the communities where it grows wild, as well as increasingly in the western world where it is becoming a more well-known and popular “super-food” (their term, not mine).  It has been hyped, or perhaps even over-hyped in the media, and, as a result, people use it to treat or alleviate various illnesses or symptoms, or to prevent future illness. While many people are now studying the nutrient composition of moringa itself, from its leaves to flowers and roots, which may inform future health uses, no one has looked at the tea specifically. How much of moringa’s nutrient profile is leached into the tea that people consume? And, which Moringa oleifera cultivar is the best? Are there some that are better when consumed directly but others that are better when made into tea? We hope to look into these questions and others by analyzing the nutrient and protein profiles of teas extracted from a range of moringas, all grown in the same place, at the same time..

While on paper this project seems very simple, it was actually a bit more of a headache than I had anticipated. I planned to pick leaves from all the varietals at once, in the hopes of moving through all the steps at the same time. I was planning to pick, strip, and dry them all in small brown envelopes “stuffed” in a pot of silica gel, and then used to make into tea. It seemed fairly logical and efficient in my mind. 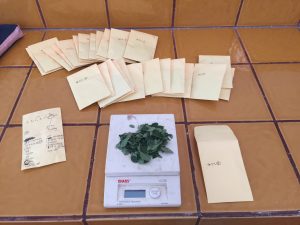 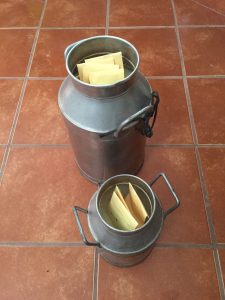 After the leaves were dry, I could finally use them to make the tea. After a bit more problem solving, I resorted to mixing the tea with alcohol for long-term storage (and so the tea itself wouldn’t get moldy). No more mold and perfectly preserved samples of each of the teas!

After taping the tubes within an inch of their lives to ensure no leaks upon cross-country transport, I sent the tubes on their way for the formal processing in a modern lab with actual equipment (instead of the kitchen of a local house). The alcoholic teas will be dried in a lab and sent back to Baltimore for analysis.  Here’s hoping we find some interesting results and can tell all future moringa tea drinkers which varietal will best serve their health!

Editor’s Note: Helen Giles received funding from the Johns Hopkins Bloomberg School of Public Health’s Center for Global Health, to travel to our research site in Western Mexico.  This site is located at the International Moringa Germplasm Center.  The project is also funded by Trees for Life International.  More can be found about the site and this research athttp://moringaceae.org/index.html.

Helen Giles
Student at Johns Hopkins Bloomberg School of Public Health
Helen Giles is a second year Masters student at the Johns Hopkins Bloomberg School of Public Health in the Department of International Health, Health Systems, also earning a Certificate in Food Systems, Environment, and Public Health. When not studying all things food and health related, she enjoys experiencing new cultures, testing out new plant-based recipes, and snuggling with her many stuffed animal frogs. Helen is originally from Durham, North Carolina and received her B.A. from the University of Chicago.