Clinical Trial of Sulforaphane in Autism

Autism is a behavioral disorder affecting more than one in a hundred individuals, predominantly males (4:1) in the U.S. It is characterized by an unawareness and lack of appreciation that others have beliefs and communication patterns different from their own, and by impaired ability to communicate and interact socially with others. A boy of 5 was described as: “happiest when he was alone. . . drawing into a shell and living within himself. . . oblivious to everything around him.”

Autism becomes apparent early in life, is unrelated to intelligence, and involves self-centered, isolated, subjective mental activities, repetitive stereotypic behavior and language. The annual costs in the U.S. are estimated near $100 billion. A striking characteristic of autism is that in a substantial fraction of individuals there is dramatic improvement in symptoms during episodes of febrile illness.

The rationale for a clinical trial of sulforaphane in autism was based on evidence that autism is characterized by oxidative stress, depressed antioxidant capacity, and mitochondrial dysfunction. These pathological processes are antagonized by sulforaphane.

We have recently completed a randomized, double blind, placebo controlled trial in which sulforaphane was delivered as a sulforaphane-rich broccoli sprout extract. Of 40 moderately severely autistic patients, 26 were treated and 14 were in the placebo group. Sulforaphane (50, 100, or 150 µmol depending on body weight) or placebo were administered daily for 18 weeks (126 days). Four questionnaires (each comprising multiple questions that quantify behavior) were administered prior to enrollment, at 4, 10, and 18 weeks of treatment, and after a 4-week post-dosing washout period.

There was often dramatic symptomatic improvement in 17 of the 26 sulforaphane-treated patients, (nine patients did not improve). This improvement then diminished during the 4-week post-dosing period. 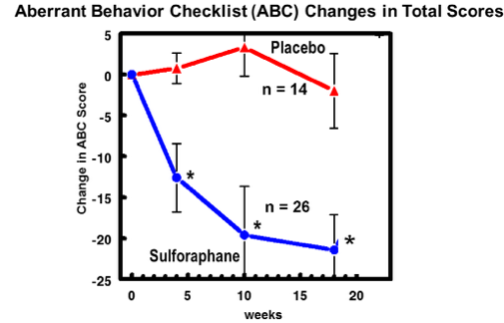 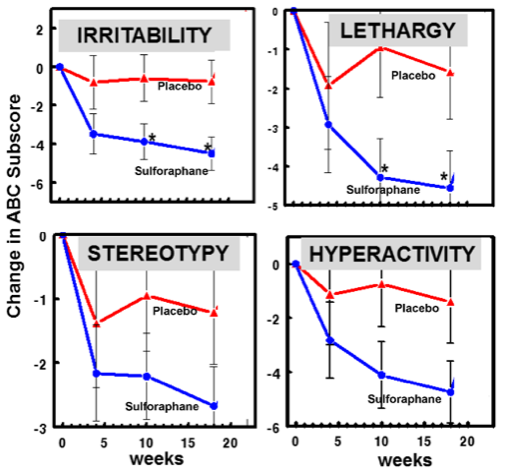